A NEW GUITAR CONCERTO IS BORN 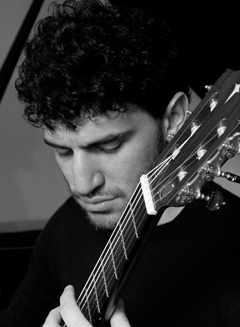 “Quattro Canti, as the title suggests, is a guitar concerto divided into four movements. However this is not the only interpretation, as happens in my other works.” says the author Francesco Di Fiore.

“Who knows Palermo will surely guess my intention to describe musically the heart of my city, ideally placed at Quattro Canti (“Four Corners”, but also “Four Songs”), a monumental crossroads become one of the most characteristic symbols of Palermo.

Two possible interpretations though: living the music experience becoming carried away by the flow of the four movements leaded by the guitar song or ideally standing in the center of Palermo at Quattro Canti, between Via Maqueda and Corso Vittorio Emanuele and from there watching the soul of the city.

I wanted to represent musically four images of the city seen from this precise privileged position.”

This is the story behind Quattro Canti, composed in 2015 by Francesco Di Fiore for guitarist Lapo Vannucci, to whom this work is dedicated.

Francesco Di Fiore was born in Palermo, the city of the quoted “monumental crossroads” Quattro Canti. The commission (by guitarist Lapo Vannucci) of a new guitar concerto, which gladly is going to nourish quite a narrow repertoire of this genre, gave this “musician” of post-modern post-minimalist music the possibility to reconnect to his hometown, from where he and his music were quite missing for years, while touring instead the rest of Europe, America and China.

The movements of the concert tell about an iconic Palermo:

Quattro Canti guitar concerto is part of Francesco Di Fiore’s The Concerto Trilogy, along with Tre Paesaggi (“Three Landscapes”), double concerto for guitar, piano and orchestra, premiered last January in Romania (HERE you can listen to a fragment), that will be performed again on June 2 in Vidin by Lapo Vannucci and Luca Torrigiani, and Concerto Ostinato, a piano concerto to be premiered by the end of 2016.